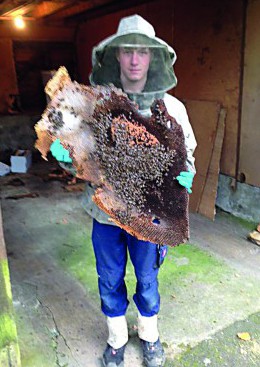 A vet practice in Horsham has sent a nest of honeybees, which were occupying one of their chimneys, to start a new life in man-made hives in a field in Ewhurst.  Farthings Vets on Guildford Road had experienced recurring problems with bees nesting in one of its chimneys for several years but, this year, their numbers had increased greatly and the insects were finding their way into the kennels, causing staff to have to evacuate them to ensure the safety of their patients.  Given concerns about dwindling bee populations, the practice wanted to remove them safely rather than have them destroyed so contracted local firm PGH Pest Control and Prevention to remove them and take them to start a new life away from the centre of Horsham.  The honeycomb and accompanying bees, estimated to number 30,000, were removed safely from the chimney on Sunday 24 July.

Commenting, Farthings’ Practice Manager, Angela Batchelor, said: “The bees seem very attracted to our chimneys and we were concerned at the potential risk to our patients.  Having said that, it was important to us that they were removed and not simply destroyed because we understand just how important bees are to our ecosystem and didn’t want to add to the problem of their falling numbers.  PGH was the only company we contacted which would actually remove them alive.  It was amazing watching them bring out the honeycomb and, once they’d completed this delicate operation, they also adapted our chimneys to make them less attractive to bees in the future.  We hope the bees will be very happy in their new home!”  Farthings Veterinary Group’s Horsham branch can be contacted on 01403 252900.  It also has a branch in Billingshurst. 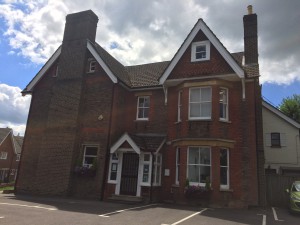