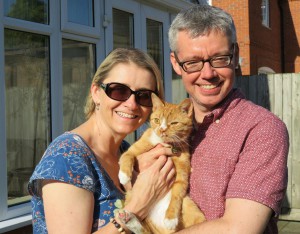 A vet has praised the owners of a cat from Hemington, so badly injured when he was hit by a car in March 2016, he was thought unlikely to live.  Now, back at home and even catching mice, the young ginger and white cat, Leo, has survived, say the vets caring for him, largely because of the round-the-clock care his family has given him for the last four months.

Leo, who was still a kitten at the time of the accident, is owned by the Storey family who lived in Hemington until the end of Jun.  On Sunday 20 March, instead of heading out into fields behind their house as usual, he ran onto the road in front and was hit by a car.   Allen, his wife Nadine and their children Elliot (15) and Thomasin (12) took him to the emergency vets who confirmed that he had sustained severe head injuries in the collision and that his survival was in the balance.  On the following day, he was taken to Dovecote Veterinary Hospital in Castle Donington, which specialises in veterinary surgery, neurology and diagnostic imaging.

A CT scan taken by vet Andrew Robinson at Dovecote showed that Leo had suffered multiple fractures both to his skull and jaw.  Even if surgery could heal the fractures, it was unclear whether damage might have been caused to his brain.  The Storeys were keen to give him a chance so Andrew operated on Leo, wiring his jaw and skull together to stabilise them.  The surgery was complex with the cat suffering further complications, including a problem with his eye, a kidney infection and neurological damage to his swallowing and tongue movement.  He had to be fed through a tube into his throat and his survival was in the balance as he remained in hospital for a month.

When Leo finally went home on 25 April, the Storeys had to take on the task of tube feeding him for several weeks.  Once he was able to have the tube removed, they then had to teach him to eat again using his mouth, a difficult task they managed to achieve during June.  Finally, in just the last couple of weeks, Leo has been well enough to go outside and is even catching mice.  Together with his brother Austen, he is now getting to know his new home in Willoughby on the Wolds.

Commenting on Leo’s recovery, Andrew Robinson said: “It’s great to hear that Leo is now back to his old tricks.  While the surgery was difficult, the most challenging aspect of Leo’s case has been the prolonged recovery period and the extra care that he has required, both while he was being tube-fed and when he was learning to eat normally again.  The Storey family has, throughout, been completely dedicated to looking after him and, without their commitment to helping him recover, I doubt that he’d be here today.  They are a special family and he is a lucky cat!”

Allen Storey said: “We were in a complete state of shock when the accident happened. We knew he was in a critical condition but, as he was so young and full of life, we were determined to give him a chance.

“It’s been a long road and I’d like to thank the whole team at Dovecote who have been so caring but honest and realistic with us throughout.  The vets were incredibly skilful and the nursing staff were so dedicated and looked after Leo like one of their own.

“Encouraging Leo to start eating for himself again was difficult and we all had to stick with it and come up with different ideas to tempt him.  When he did finally start eating from a bowl on his own, it was an emotional moment for us all.  Looking at him now, almost fully back to his normal affectionate and curious self, we are delighted that he and his brother can get on with enjoying their lives again.”

Dovecote Veterinary Referrals is based at 5 Delven Lane, Castle Donington, Derby and can be contacted on 01332 810395.