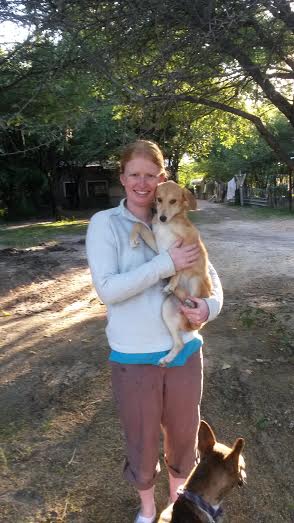 Naomi Walters is a vet at the Woodlands Veterinary Group in Plymouth. During May 2016, she took advantage of CVS’ Volunteer Abroad scheme, taking the week of paid leave we offer in addition to two weeks’ holiday, to volunteer for three weeks with an animal welfare charity called Maun Animal Welfare Society (MAWS). MAWS improves the lives of domestic animals by providing veterinary services and education in Maun, one of the largest towns in Botswana. The charity is run by a small team of passionate volunteers who keep the clinic running purely through donations and fundraising.

She tells us about the experience:

Having been bitten by the volunteering bug two years ago following a trip to Malawi, my husband (also a vet) and I travelled to Botswana in May to work at a charity clinic in Maun run by MAWS. We had found the charity through WVS and, with all our paperwork in order, we set off for three weeks of neutering and exploring. Following a brief diversion through Gaborone, the capital of Botswana, to register as vets with the Botswana Veterinary Council, we arrived in Maun. While the MAWS clinic was basic by UK standards, it was adequately equipped for neutering and first aid procedures. It even had an ultrasound scanner which a previous volunteer had bravely brought over on the plane. We were impressed by the array of drugs available, though the lack of gaseous anaesthetic was daunting at first.

We were staying in a cottage on site and were pleased to find two dogs already in residence!

Each day we would start at 8am, walking and medicating the in-patients, before starting surgery at 9am. We usually had between four and eight in-patients, mostly dogs recovering from surgeries, such as amputations, enucleations and stitch ups. Most were owned and able to return to their owners once back to full health, but there were also a few dogs awaiting new homes.

MAWS provides a free of charge neutering and vaccination service for locals, as well as treating injuries and illnesses. While all the dogs we operated on were ‘owned’, they would wander the streets during the day before returning home for food and a bed overnight. Our patients were collected by Nation, the clinic’s dog handler. We let him know how many dogs we were able to operate on the next day and he would provide them.

The dogs were all loved and friendly though they weren’t used to leads which made handling a little tricky. They were anaesthetised with IM xyalzine, followed by IM ketamine and then IV diazepam. An IV catheter was placed for all surgeries and they were given IV top-ups of thiopentone or ketamine/diazepam if needed. ET tubes were placed in all dogs, although there was no oxygen or anaesthetic gas. We soon got used to the protocol and the majority of anaesthetics and recoveries were stable and uneventful. We soon became tuned into the signs if one of our patients needed a top up!

We worked alongside a Scottish nurse and an Australian vet, as well as two locals who were in charge of the day to day running of the clinic. We averaged about 12 operations a day between the two of us, and 17 on our busiest day. We soon got used to selecting our own instruments from cold steriliser and becoming quite self-sufficient during surgery. We were warned the bitches would bleed a lot due to Ehrlicia, but still found the first few were quite stressful! A blood free surgery was impossible but all the dogs recovered well.

We also learnt that few neuters were straight forward. Additional problems included pregnancy, pyometra, in-season females and bite wounds to the scrotum – we performed a couple of ablations. Transmissible Venereal Tumours (TVT’s) are common in Botswana and we saw a number of these. They can be very invasive and, if untreated, will become life-threatening. The tumours can be cured with four weekly treatments of vincristine, alongside neutering. MAWS offer this treatment free of charge to locals and, every Saturday, up to 10 dogs would be bought in for vincristine injections.

One of the highlights of our stay was an outreach day in the local community. We travelled for two hours to a village and set up a neutering clinic for the day. We operated in an open-sided shelter, in front of a wide-eyed audience of local children, managing to neuter and vaccinate more than 30 dogs. Neutering outdoors with the sun in your eyes is certainly very different to our sterile operating theatres back home!

During our three week stay we were lucky enough to fly out to the Okavango Delta for a two-day safari. We had an unforgettable time watching the wildlife and it was a great way to finish our holiday. We found the break rewarding and a great experience. While not a traditional holiday we found we were able to unwind and relax, as well as experiencing a different culture and making a small difference to the local community. 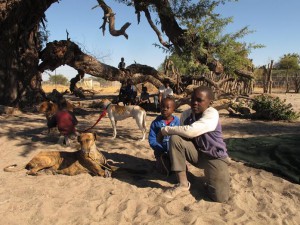