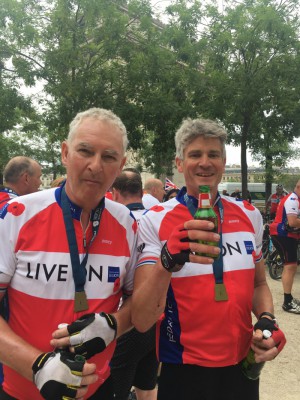 Two vets from Highcroft Veterinary Referrals in Bristol have completed the British Legion Pedal to Paris, raising £2,000 to support the charity’s work within the armed forces community.  The four-day ride, which took place from 1-5 September, covered a distance of 460 km/284 miles, starting at Greenwich and finishing in the Champs Elysee in Paris.

Keen to face the challenge it presented and to take the opportunity to cycle through France with motorcycle outriders, Robert Dawson, Small Animal Director, and Richard Killen, Director of Clinical Services, took part.  Despite struggling to find time for training, they completed the ride successfully, arriving at the Arc de Triomphe as part of the peleton of participating 350 cyclists.  Bristol-based Highcroft Veterinary Referrals provides expert and specialist care for cats, dogs, rabbits and exotic pets.

Commenting, Mr Dawson said: “Richard has been a keen cyclist and has cycled from John O’Groats to Land’s End in years gone by.  He admitted to being a little out of practice and I was new to cycling so it was always going to be a baptism of fire.  The route through the beautiful English and French countryside and the feeling of camaraderie during the ride were great.   By the end, to say our legs were sore would be a serious understatement – but we were determined to finish and were delighted to do so!”